The Ins and Outs of Power Strips, Battery Backups, and Surge Protectors 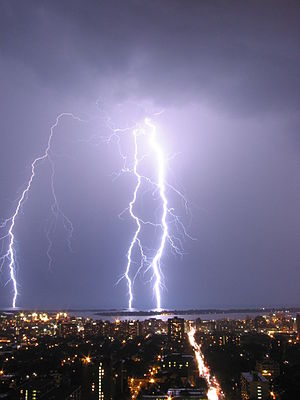 With Spring storms upon us, strong electrical activity and wind bringing down power lines become a very real danger for computers. One aspect of nearly all technology is that it requires a power source; for most of us, that means plugging into an outlet with power provided by the electric company. Electricity is notoriously problematic with brown-outs, black-outs, surges, spikes, and plain old fluctuations. All of these can cause problems for your technology and especially your computers.

Surges, spikes, and fluctuations can damage sensitive components such as processors, RAM, hard drives, monitors and video cards. Repeated fluctuations can actually “fry” your computer. The most instantaneous cause of electrical damage is a lightning strike which can destroy entire systems in a flash. Brown-outs and Black-Outs describe actual power interruptions or dips in power which cause additional wear and tear on the computer, and can additionally damage data stored on a hard drive and possibly even damage components.

Protection comes in many forms with varying effectiveness. While none of these are perfect, they can help protect your investment and your data.

The most basic, providing no protection, is a power strip. Power strips are of little use beyond making one outlet into multiple.

Surge Protectors or Suppressors, often incorrectly referred to as power strips, have a major advantage; they are able to absorb a surge in power. They do however have a limit to how much they can absorb in a single event, rated in Joules, before they fail. Many will not survive a lightning strike, sometimes even being “fried” open allowing the entire strike to reach attached devices.  Another thing to be aware of is that this protection is not immediate, there is a minuscule delay from the beginning of the surge to when the protection components kick in; this delayed response time can still lead to problems and still fry your system. An exhaustive explanation
can be found here: http://en.wikipedia.org/wiki/Surge_protector

A Battery Backup or Uninterruptable Power Supply (UPS) is commonly used with critical systems, and can also be very helpful in a home environment. Their primary function is to continue providing power in a failure event. While the battery charge is usually exhausted quickly, it is normally enough time to correct the failure or shut down the system properly. Battery Backups are most often rated in VA (volt-ampere) and give an estimated run-time for common equipment uses at load. Many UPSs will also provide effective power noise reduction and surge/spike protection and some of the better ones also include power conditioners: http://en.wikipedia.org/wiki/Uninterruptible_power_supply

Last on the list, power conditioners.  Many high-end technology devices are susceptible to noise or ‘static’ in a power line. In these instances, a power conditioner is extremely helpful. They “clean” or filter your power source and many provide protection from “cross-talk” or noise from components plugged into the same strip. The most common application for a home user would be a Home Theater System, preventing electrical noise from interfering with sound and video quality. Most conditioners also include a Surge Protectors in the device. Like Surge Protectors, most have a Joules rating, but also include a decibel (db) rating. The higher the db rating, the better the noise filtering capability of the conditioner: http://en.wikipedia.org/wiki/Power_conditioner

One major note is that all of these devices have an effective lifespan. Most of these are rated for about 3 years. Surge Protectors can fail much more quickly in areas with erratic electrical supply and should always be replaced after a major event like a lightning strike. Most Battery Backups can handle a lot more surge events, but it may wear out the battery faster, and they should be tested yearly. Power Conditioners are very similar to Surge Protectors but normally have longer lifespans. Many products will give an estimated life expectancy of the device in the product information.